We know each other over years thanks to the late Shri Chittranjan Dass, the walking encyclopaedia of Indian Transport Industry. Perhaps you can recall our meeting in his dingy office in Karolbagh, west Delhi in early 2011.

Of course, the latest interaction was proxy in the sense my Bengaluru-based Bureau Chief (South) of DRIVERS DUNIYA Sarada Vishnubhatla met you for a full fledged interview following Minister of Road Transport & Highways Nitin Gadkari’s rock-acid comments on the desirability of scrapping RTOs out of Indian transport ecosystem.

Well, the issue here is about my personal experience last week (24-29 June, 2016) while on a truck trip from Chennai to Gurgaon to understand challenges drivers face on Indian Highways. Obviously, I have to cross your state of Karnataka almost one whole day (25 June).

What I witnessed in Koppal district immediately after crossing the Hunugand-Bijapur Toll Plaza around 1300 hours. 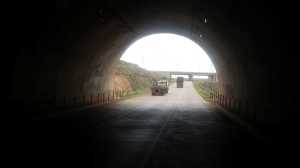 Mr Ahamed, we did pay the user fee at the Plaza and within the next 200 metres, a group of decently dressed men blocked our vehicle from moving forward. We did notice similar happening on the other side of this beautiful 4 lane National Highway 13 or is it NH50.

Our driver got out with the cloth folder containing relevant documents and a yellow slip separately which was visible from my conductor side seat inside the truck.
A SUV stood under the shades of a few trees on the roadside. The vehicle displayed letters “RTO” in bold and big letters. I quickly looked at the number plate. Alas, the lettering was in Kannada which i could not read or write. Neither my driver companions. Nonetheless, we did noted the RTO vehicle no. reading 9009. Easy to remember, you see, Mr Ahamed!
There were four other drivers stood in queue outside the RTO vehicle: some with yellow slips and some without. I could not click photos because the goons on the road who stopped us were watching us closely. Life is precious.
One by one, drivers exchanged currency notes with whoever was sitting inside the RTO vehicle. Soon, my driver also returned and shared the following.
The yellow slip which he and others carried to RTO parked under tree shades was the challan issued at the Tamil Nadu or Andhra Pradesh-Karnataka border checkpost for a sum of Rs.2,000 (yes, Two thousand rupees only) for some or other fictitious charges which we all know is the sort of legalized racketeering by all state governments to mop up revenue.
By the way, if this yellow slip is issued which has a validity of one full month for the particular truck, no other RTO in the state while passing can bother drivers. Except this Koppal point RTO (unfortunately, could not be identified with photographic evidence  or name because the smart but cowardly bribe seeker hid himself iside the vehicle), several other RTOs also halted our vehicle in your state of Karnataka but quietly allowed smooth passage after checking the yellow slip.
This Koppal RTO demand was very simple: It does not matter you paid Rs.2,000 to the government coffers. Did you give me? No. So you pay Rs.300. If you don’t have that yellow slip (receipt for Rs.2,000 or whatever sum collected by the government), then pay Rs.500. Jokingly this corrupt RTO @ Koppal point told our driver that he was giving a discount of Rs.200.
Both you and I (why, all of us know) know that he transacted an illegal transaction. Mr Ahmed, it is one of your fraternity did this and possibly giving repeat performance almost daily. As President of AIFOMVD, I request you to identify this goon from the vehicle number ending with 9009 and initiate suitable action.
This should be a cakewalk for you since you have all vehicle data and you will also know who was on duty at this point on the said date.
Am marking a copy of this note to Smt M Kanagavalli, Deputy Commissioner of Koppal under whose jurisdiction is “crime” had taken place. Yes, it is a law and order case with genuine and peaceful business activity being fleeced for no rhyme or reason.

Smt Kanagavalli is being requested to tighten law enforcement on the highways passing through his jurisdiction through the police force under him.
Mr Ahamed, I am sorry to say that Karnataka is outsmarting Bihar and Uttar Pradesh when it comes to highway highhandedness. Your state of Karnataka is topping the chart of RTO goons. A dubious distinction. Honest and upright officers like you have to strive hard to clean up the corrupt system. Is it too much to ask for?
In fact when your interview in DRIVERS DUNIYA March-May 2016 was read in the Ministry of Road Transport & Highways in Delhi, some bureaucrats openly said that Ähamed is the right man at the wrong place. You know what they actually meant. Mr Ahamed, prove them wrong, please!
During the next trip to Bengaluru, look forward to having a cup of coffee or tea with you,
Cheers
Ramesh Kumar