This stretch of national highways in linking the key ports of Kandla and Mundhra for ferrying imports from the port to the hinter/mainland and pushing exports through these two key ports on the western coast.

Take a look at these images shot during this two day truck trip: 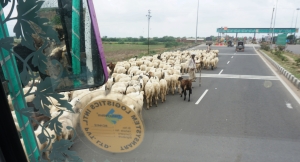 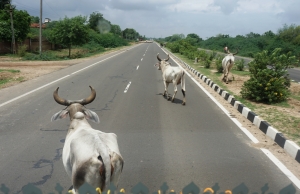 Sir, here are a few questions:
1)    The divider/meridian is created as a buffer between flowing traffic in opposite direction. If so, how come, this critical patch on national highways – maintained by NHAI directly or through concessionaires – converted into ‘grazing ground for cattle”? Sir, whose responsibility it is to ensure such transgressions does not happen from road safety perspective?
2)    While it is true that cattle or goat/sheep rearing is a critical livelihood for a huge segment of fellow Indians particularly in remote villages of India, what steps NHAI is taking and IMPLEMENTING such transgressions are kept to the minimum?
Good that these kind of large scale movement of  domestic animals happen during daytime so that drivers (of commercial vehicles and passenger cars/buses) are fully aware and avoid fatal accidents. But at night time, stray cattle onto highways is no fiction but a fact of life. Drivers hit and run, thus leaving the carcass of animals – whatever it is – on the highways to be leveled and scavenged by moving vehicles mostly. No concessionaire or NHAI staff undertake cleaning act.
3)    One of the above images show monitoring sheep and buffaloes while they graze on the highway sides. None can decipher when the animal would decide to stray into the motorable section from the sides.
I can easily convert this ground report into an RTI with a Rs.10 IPO and demand responses. Bur the idea is NOT to harass NHAI with paper work.
Honestly, I will be glad to receive a detailed response as to the kind of steps NHAI has scripted and IMPLEMENTING a sincere effort to REDUCE cattle menace on highways – state or national.

Am sure various transport lobby groups and Indian companies such as Maruti Suzuki which pushes a large volume of its passenger cars for exports via Mundhra port from Gurgagaon/Manesar in Haryana would have broached this subject. Constant interruptions on these routes for these export vehicles for quality conscious rest of the world lead extra Pre-Delivery Inspections (PDIs) at Mundhra Port or any other port thus adding to cost and delayed shipment. Above all, unnecessary labour involvement in rectifying glitches – minor or major – to these vehicles.
There is yet another question: on the Mumbai-Pune Expressway, iron grills have come up from the road safety perspective. Concessionaires whom I had spoken to in this regard posit that there are NO guidelines from NHAI on this median iron grills. Also, they claim that if such grills were to be erected, NHAI has to bear this extra cost.

Looking forward to hearing from you on all these points raised,

One Response to Cattle Menace on National Highways