Letter to NHAI about IRB’s pathetic handling of NH8

In the early hours  of 22 July 2016,  the highway stretch near Charoti Naka Toll on National Highway 8, managed by IRB, witnessed umpteenth accident. Here are the images for your perusal sent by our Coordinator Harbans Singh, based out of Charoti Naka. 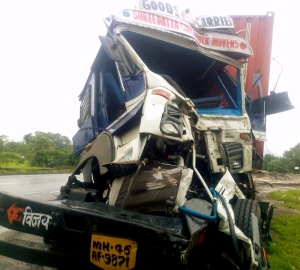 Well, this is not one off accidents on the stretch from Borivli upto Charoti Naka Toll, under the management of IRB. This is a serious accident spot due to a variety of reasons, including defective designing, perpetual road expansion work in progress, non-reflective yellow stickers on the divider and the absence of divider etc.
Added to this the poor response of IRB’s patrolling on the stretch under their supervision.  Repsonse team in any emergency is pathetic, according to our Harbans Singh. When a truck caught fire on the same stretch a few months ago, the IRB team had no fire extinguisher or fire engine to douse the same. As a result, the entire truck was gutted and the driver suffered 30% burn injuries – whom I had personally visited with Harbans atSilvasasa Hopsital. Here are the relevant images of this accident-incident: 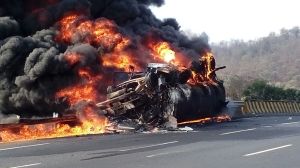 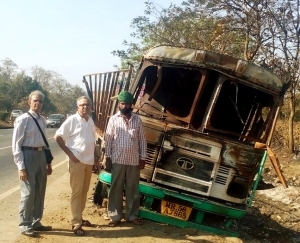 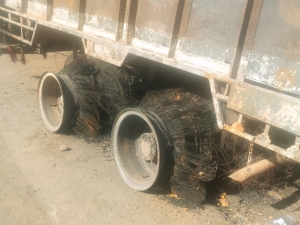 The ill-preparedness of IRB to fight this fire accident on NH8 near Mendhwan can be gauged from the fact that it had no fire engine and  it sought the help of MIDC Tarapur (18 km away from this accident spot). They begin to bargain on the premise that MIDC Tarapur fire station is meant for the industrial area and if they provide assistance to IRB to fight a fire on NH8 managed by IRB, then IRB has to pay for the services.  The IRB team at the toll argued that IRB will not pay because the accident is about a truck on highway. Ultimately, better sense prevailed and they sorted out. By which time, truck got gutted.
Yet another accident from the same stretch early this week (July 2016). A Mumbai-bound truck from Ahmedabad with saline consignment hit a breakdown  but unlit truck in the early hours. An alert highway patrol team could have averted any possible mishaps by cordoning off the area. But IRB’s credentials in this sphere is doubtful. Here are those images for your perusal. 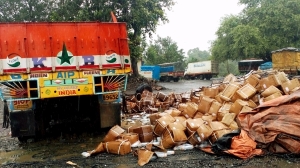 Well, Mr Chairman, here is our PRAYER:
a)    ADVISE IRB to fulfill its obligations to the road users 24×7 because it is a National Highway with necessary infrastructure: it is found to be wanting in possessing right capacity cranes, water tankers to douse fire in emergencies, more calibrated and watchful/alert Highway Patrolling team.
b)    ADVISE IRB to replace existing yellow patches on the dividers which DO NOT REFLECT at all in the highway (it is an ordinary paint job it appears) from road safety angle.
c)    ADVISE IRB Highway Patrol Team to warn illegally parked trucks on the shoulders of NH8 at the entrance of illegal(?) truck dhabas to move away. Otherwise tow these vehicles which are most of the time without tail lights in night time.
d)    ADVISE IRB to repair/reinstall Emergency Boxes (SOS) on both sides of highway for emergency calls. None of them operational because what stands at these locations are JUST EMPTY BOXES. For example, look at this image on NH8, managed by IRB. Our team did a survey of this stretch found every single box empty and non functional.  SIGNIFICANTLY, in this ghat section  mobile phone connectivity is zero. So in case of emergency, no one can be reached. They have to be spotted by Highway Patrol or some genuinely concerned citizen to alert someone and get assistance. The less said about IRB’s Highway Patrolling, the better. Look at the images below.

Sir, I wonder whether this Charoti Naka Toll and the nearby notorious Mendhwan spot of notorious gas tanker leak and massive death of local villages is included in the Black spots that needs correction under the Ministry of Road & Transport & Highways. If it is, well and good. If it is not included yet, it is worth adding. Its never too late …. Particularly given the track record of IRB in this stretch of the past few months, if not years.
Hope to hear from your team.
Warm regards
Ramesh Kumar